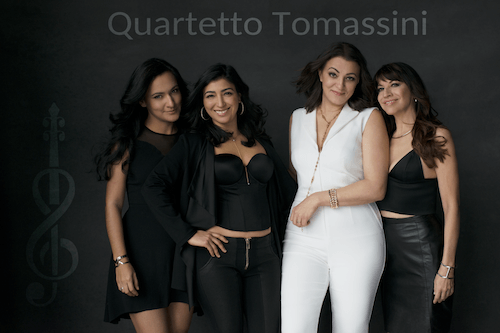 This February I had the pleasure of viewing a streamed performance of Quartetto Tomassini. As the name implies, it is a string quartet led by violinist, Patrisa Tomassini. Performed on a snowy night at Sholes Street Studio, Brooklyn, the performers embarked on a journey as seen through tango-colored glasses. The space was small, but cozy; a good room for a quartet of instruments to be intimate and supportive of each other in. While not all pieces were obvious Argentinean tangos, there were subtle hints of Latin rhythms throughout, mixed in with other musical forms and styles.

The group opened with a popular piece, Por una Cabeza, by French composer Carlos Gardel. This piece can be heard in many popular films, Scent of A Woman is perhaps the most famous, but my personal favorite is Bad Santa. The quartet executed the playful, yet at times fiery, passages well.  They then moved on to play a “Four Seasons” styled song cycle (not to be confused with Vivaldi’s Four Seasons – I unfortunately couldn’t hear if there was a composers name mentioned on the video).

The first season they performed was “Winter,” with Ms. Tomassini suggesting the imagery be “fire and ice all in one.” The piece was a juxtaposition of just that; beginning with a passionate and chilling slow passage, quickly jumping to an equally passionate and sometimes violent fast section. The piece also employed some bow scratching, offering an abrasive quality paired with typically more joyous-sounding sections.

The third piece was titled Fugue and Mystery, with Ms. Tomassini describing a fugue as a “more complicated form of canon” (fugues are one of the most complicated forms to write and understand in Western music). The subject of the fugue was whimsical but also raucous, especially in articulation. Each following voice matched bowing articulation appropriately, and visually the performers seemed to be exceptionally focused as one entity. The ending was a slow section containing tango rhythms, albeit subtly tucked into the texture of the piece itself.

From the “Four Seasons” song cycle again, the next piece was titled Autumn, and was described as “harmonies that are thick and rich and on top of each other” to symbolize the abundance of a harvest before the harsh winter season. There was a clever underlying clave rhythm of 3+3+2, heard especially in the melody. Out of order, they skipped to “Spring,” which offered some more expected pep. Overall it seems this thrilling cycle offered a “pesante” and maybe even harsh view of the seasons! They concluded the movement with picturesque swishes of the bow, resulting in a few bow hairs being rent from Ms. Tomassini’s bow.

A Gershwin piece, Embraceable You, followed. This was a nice respite from the more dramatic tango-styled pieces the group had dug into minutes before.  As elegant and as beautiful as this piece was, we were immediately brought back to a more aggressive piece, titled Squalo, or “shark” by Astor Piazzolla. With a pulsing, repeated, syncopated underlying rhythm, our shark imagery comes clearly into mind. But what the composer did next was a nice relief; inserting a simple yet effective sequence to break up the clamor and chaos of the previous section. This sequenced section would later come back with a more jarring and repetitious rhythm heard underneath it.

Their last piece was also by Piazzolla, titled Tangeria. It is a movement of four, but they played only one, which highlighted the “dragging” movement of tango dancers’ feet. The piece itself was a more complex design than a regular tango; all rhythmic elements of one were there, but interspersed with sections of frantic bowing. This culminated with the groups quintessential graceful but aggressive attention to the notes on the page. 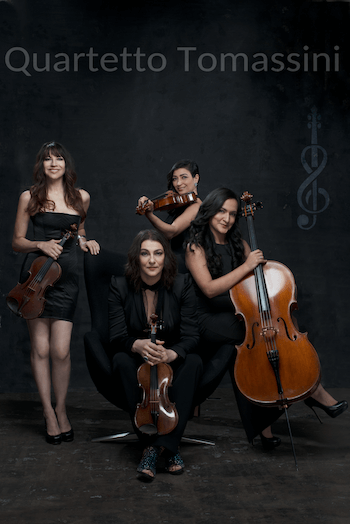 These four women worked masterfully to put on a performance that was impassioned, inspiring, and downright fun. The cellist towards the end mentioned that they would work with a dancer in the future – something that sounds like a symbiotic and entertaining pairing. Quartetto Tomassini is a relief for when a concert of mainstream music simply won’t do. Whether it’s date night, or to expand your mind, this group takes you on a well-curated journey of tango, mixed with other musical elements – they are sure to not disappoint!